Am happy to announce that today I was informed that I been awarded the Ashoka Grant by Khyentse Foundation, for the second year running. The first year it was awarded for the ‘Innate Kalacakra’ project (this translation booklet can be downloaded for free from this website here).  This new proposed  project, aimed to be completed and published in 2021, is for a philosophical text, ‘Music of the Ultimate Sphere’, written by HE 10th Sangye Nyenpa Rinpoche, which I started translating in March 2019 (after freely offering to do it) and for which I received the personal permission, transmission and direct instruction (as well as a personal small financial offering) to translate from Rinpoche himself (for more on that see a previous post here). He also met me several times in Nepal in May 2019 to give personal one on one explanations of sections of the text. 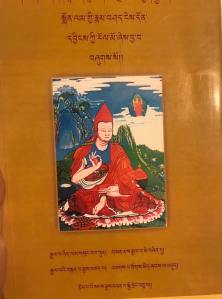 In July 2019, I applied for the Ashoka grant funding, before Rinpoche abruptly ‘disappeared’ from contact and public view in September 2019, and did not return to Nepal as originally planned. The reason for this seems to be his continuing  psychological and physical health reasons, as well as the surfacing of serious allegations by myself and others regarding his sexual and emotional misconduct towards various women who have told people they feel exploited and harmed by him.  I sincerely hope these issues will be resolved appropriately in the forthcoming year and that truth, love and compassion will prevail for all concerned.

Therefore, I would like to thank the Khyentse Foundation (and of course the root of all their activity HE Dzongsar Khyentse Rinpoche) for their unparalleled continuing support and encouragement not only to myself but to many other Dharma translators, students and practitioners. May it be of benefit!

In February 2020, the Benchen Phuntshok Ling Belgium chairwoman, Carina Bleicher-Kramer, (whom I have never met or spoken to, and said to be the previous partner of the Benchen chairman, Tempa Lama and mother of his children) sent a vindictive, damaging and misleading letter to Khyentse Foundation that led to them withdrawing their award of an Ashoka Grant I had been awarded to translate the shentong text, Music of the Ultimate Sphere, by Sangye Nyenpa Rinpoche. The letter misleadingly informed them that I did not have permission to translate or publish the text, even though since January 2019 I had been working on that text, and others, with the express direct permission, transmission and personal in-person instruction (and financial offering) of the author, Sangye Nyenpa.

At no time, did Benchen or Sangye Nyenpa contact me personally, verbally or in writing, to communicate this to me before writing to the Khyentse Foundation. Despite several requests to Benchen in Nepal and Europe to withdraw (or amend) this false and misleading letter to Khyentse Foundation, they have refused to respond or do so.  I have been legally advised that I could sue them in court for the letter, but have neither the time, money or inclination to do so. For that reason, I am now clarifying the situation here.

Benchen Publications also, in retaliation for my serious allegations regarding Sangye Nyenpa’s misconduct and dishonesty towards myself and other women (which I told them about in September 2019, one year after meeting him), hurriedly published a translation of the same text by David Molk this year.  I was very surprised to see this, as I had been working for months on it with the direct support and input of Sangye Nyenpa and this other translation had never been mentioned.  David Molk later told me in emails that:

After these actions have been taken, without even communicating with me about any of it, I no longer see any benefit in continuing to translate the text. However, such bullying, vindictive actions against a lone woman and female Dharma translator are not acceptable.

This is not the first time Benchen monastery have had issues with Dharma translators. I was told by another translator that he also had had a bad experience with them several years ago when they published his translation of a text without his permission.

The reasons for this action are various but, in particular, various issues and concerns have been raised by several women independently, including myself, to Sangye Nyenpa and Benchen representatives privately (and to other Tibetan Buddhist teachers within the lineage) regarding his sexual and ethical misconduct, for more on that issue of the importance of love, respect and consent in male-female Vajrayana partnerships, see here.

Audio and written evidence from Sangye Nyenpa is available to support what I say here and can be provided on request to named and clearly identifiable individuals.

Later, when I tried to contact Dzongsar Jamyang Khyentse Rinpoche about the unethical and unfair withdrawal of the grant via email, his assistant, Tashi Colman gave his unsolicited opinion, attacked me and called me a liar in emails, despite having no real personal knowledge or evidence about the case. He also breached my confidentiality by sharing my emails with another member of the KF staff. After being subjected to all that, which only added to a sense of injustice and bullying, he eventually told me that he had passed my emails to DJKR, who had read them but he had received no response.

In addition, since then, I applied twice for KF funding for different translation projects and was not successful. Worse, despite the Australian Director of the new Khyentse Vision Project, Dolma Gunther (sister of the wife of one of the Khyentse Rinpoches, whom I have never spoken to or met) initially writing a long and highly complimentary email to me about how much she loved my website and work, and wanted to include my translations on Jamyang Khyentse Wango I had already done, only a few months later, the same  Director responded that she had deliberately excluded me from the project because some people (whom she refused to name or give details) had told her I was ‘toxic’.  I explained to her that was discriminatory conduct and defamatory gossip but it had zero effect. This is not a fair or ethical way to treat human beings or suvrvivors of lama misconduct, never mind a Buddhist way.

Needless to say, my prior respect and appreciation for Khyentse Foundation and Dzongsar Khyentse Rinpoche is no longer what it was.  In fact, the nepotism and discrimination has actually started to make me wonder if it is such a good thing that KF are now becoming so prevalent in so many areas of Buddhist Studies and academia.

In any case, now after seeing the very ‘corporate’ big money approach of KVP to translation and its long lists of committees, boards, translation training programmes and so on, and discovering that some of the people on those lists are there in name only, I can honestly say that it really is not ‘my cup of tea’! Nonetheless, I think it is important that people know about what happened to me as a survivor of lama abuse and misconduct, as it shows yet again why survivors often stay silent on these issues, especially if they are translators, teachers or scholars within Buddhism.