Yesterday HE Shechen Rabjam Rinpoche posted a short offering prayer, Pacifying the Turmoil of the Mamos ( ‘khrugs skong bsdus pa) to recite yesterday to pacify what are called Mamos in Tibetan Buddhism.  The title of the prayer in  Tibetan Drugkong Dupa means ‘pacifying’ or ‘appeasing’ (skong) the ‘turmoil’ or ‘agitation’/’disturbance’ (‘khrugs). It was composed by the former Shechen Gyaltsab Rinpoche (the root lama of HH Dilgo Khyentse Rinpoche and one of the main teachers of Jamyang Khyentse Chokyi Lodro). This short post reproduces the prayer (combined with Tibetan and phonetics) and also gives some information on Mamos and why it is important to pacify them.

The Tibetan word mamo (ma mo) is a non-literal translation of the Sanskrit word ‘matri’ (mātṛ). In India matris, literally ‘mother’, are wrathful feminine deities forming part of the Dharma protector, Ekadzati’s entourage. The mamos are considered to be among the main natural forces which may respond to human misconduct and environmental misuse by creating obstacles and disease.  There are:

With the rise of the tantras, “leaving behind their identities, the retinue of Skanda, or as maternal, Brahmanical goddesses,” the matris become transformed into yoginis and dakinis. Although the scriptures differ widely as to the appearance and features of the yoginis and dakinis, their most common characteristics are appearance in groups, organization into clans (Skt. kula, gotra), the ability to shape-shift and fly, guarding and/or transmitting tantric teachings, and being a sources of both grave danger and immense power. In the buddhist tantras yoginis and dakinis can be both unenlightened wild and ferocious worldly spirits as well as enlightened deities that are a source of realization and protection. Again, the medium with which one would interact or counteract the yoginis and dakinis is the mantra.

In an article about Mamos and Mamo practice, Russell Rodgers writes that:

”They are symbolized in the form of deities called dakinis. Mamos are mostly a worldly variety of dakini, unenlightened aspects of the feminine principle. (Mamos can be enlightened, however, like Ekajati.) In Tibetan Buddhism, insight or prajna, possessed by both men and women, is seen as an aspect of the feminine principle. Mamos become enraged when people lose touch with their own intelligence, and therefore with reality. Mamos cause large-scale problems: fighting and civil discord, famines, plagues, and environmental calamities. In the mamo chant, it says that they “incite cosmic warfare.” 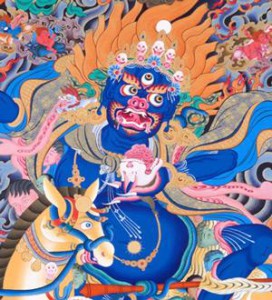 Tibetans depict mamos as fierce and ugly demonesses, black in color, with emaciated breasts and matted hair. They appear with sacks full of diseases. They cause havoc with a roll of their magical dice, creating pestilence and warfare. They are associated with the karmic consequences of degraded personal or societal actions. Their enraged response might be in proportion to the karma accumulated, but it could also be unpredictable and completely out of proportion. Similarly, we know that there have been many cases where small provocations have produced great wars.

Many mamos were tamed, or at least partially tamed, by Padmasambhava, a great adept of the eighth century. Tibetans call him the “Second Buddha.”  According to the legend, when he encountered mamos manifesting in the form of various natural and cultural obstacles on his way through Tibet, he overcame them and bound them by oath (samaya) to protect the dharma.”

Pacifying the Turmoil of the Mamos

This short supplication is normally done after reciting the Seven-Line Supplication to Padmasambhava and then Vajrakilaya practice, although it could also be done without the Vajrakilaya too.

Seeing there was a need for such a liturgy, the mantrika who delights Padmasambhava, [Shechen Gyaltsab, Gyurme Pema Namgyal] composed this at the delightful Pema Lhatse in Shang Zabbu Lung, Tsang Province, on the twenty-eighth day of the iron-bird month.

Why should we do the practice?

Chogyam Trungpa Rinpoche taught his students to observe the ‘don’ season (a period before the Tibetan new year) by reciting Pacifying the Turmoil of the Mamos one thousand times each day, for a total of ten thousand repetitions. The necessity for this is explained, in part, as follows:

Turmoil of the mamos, being connected with the feminine force, is more especially connected with breakdown of people’s connectedness, their social fabric, dysfunctional families, betrayal of loyalties — “perversion of passion” in that sense. It also refers to illness and disease, the body-mind energies being distorted and out of balance. A protector’s practice is traditionally done at the close of the year to help clear away accumulated negativities. That is why we do the practice to Pacify the Turmoil of the Mamos at this time.

But why would we do such a practice? In our culture we may occasionally feel “hounded” by misfortune, but we do not, except perhaps jokingly, attribute it to agents like mamos, gremlins, or döns. These concepts are foreign. Let’s digress for a few paragraphs to talk about what we are being hounded by, and why we might do this practice in the first place.

As always, with protectors, döns, mamos, and other deities, one can see them as external to oneself, or as aspects of one’s own mind. If you contemplate for a few minutes, you will realize that both the sense of self and the sense of an external “other” are interpretations in the mind. As you read these words, the paper or the computer screen probably seems to exist outside you, but they are actually images in your mind. You may think that these images are faithfully assembled from electric impulses traveling down your optic nerves, but the idea of electric impulses and nerves is, again, a thought in your mind. So, not only do the labels and interpretations of phenomena reside in our minds, but the actual experience seeing an appearance does as well. So appearance and mind are the same. Obviously this has implications for the sense of being “hounded.” It also means that by doing rituals that are directed outward, towards mamos and döns, we are also working on our own minds. As we pacify one, we pacify the other.

In rituals like this, we practice awareness of the words as we say them, knowing that the words are just words. This is similar to the experience of thoughts vanishing into emptiness when we see them in meditation. At the same time, we allow the words to create a path of meaning that we can explore. At the end, we rest in the wordless dimension of this meaning. This is now our point of contact with reality.

After the protector chants and the Vajrakilaya practice, we get into the heart of the mamo practice with the main chant of this practice, entitled “Pacifying the Turmoil of the Mamos.” Here, we remember that the mamos become active when people, especially practitioners, forget the ground of basic goodness, the sacredness of all phenomena, and act in a degraded way. Enraged by this, the mamos express their legendary wrath. This wrath arises not from personal insult or violation, but from our own improper relationship to life.

May all natural forces, elements and mamos be pacified and appeased and may the mother-earth be cared for, protected and loved as she continually loves and cares for us!