Today is the anniversary of Jamyang Khyentse Wangpo  (‘jam dbyangs mkhyen brtse’i dbang po) (1820-1892)), much has been written and said about one of the greatest Tibetan Buddhist masters of the 19th Century, including a biography by one of his closest teachers and spiritual friends, Jamgon Kongtrul the Great. He also produced many great students too, as Orgyan Tobgyal Rinpoche writes about in his biography of the Life of Jamyang Khyentse Wangpo here:

Generally it is said that for a master to be called exceptionally great, he must produce exceptionally great students. If we think about the students of Jamyang Khyentse, then there were about one hundred who were such great masters in their own right that they each had thousands of followers and left behind huge collections of writing, amounting in some cases to as many as forty or fifty volumes.

The great Mipham Rinpoche Jampal Gyepe Dorje, who was one such student, said in his writings that Jamyang Khyentse was, “The great master of all the Buddha’s teachings in the Land of Snows, the ultimate Vajradhara.” Mipham Rinpoche said that when you consider the learning and accomplishment of Jamyang Khyentse Wangpo, there was simply no other master in Tibetan history with whom he might be compared, and that it is unlikely that there will be anyone of his calibre again in the future.

These were some of the disciples who spread his teachings, and who helped to promote the tradition we know as Rimé. Rimé was not a new tradition created by mixing all the old traditions together. ‘Rimé’ means to have faith and pure perception for all the teachings of the Buddha, in the recognition that they are all equally valid means for bringing about liberation and omniscience, and, with this in mind, to practise the various methods of approach and accomplishment, having received the appropriate empowerments, transmissions and oral instructions.

One master who upheld this tradition and whom many of us had the great good fortune to meet was Dilgo Khyentse Rinpoche. He was someone who had the greatest respect for all the lineages of the Buddha’s teachings. Someone like him, who is a genuine follower of the great Rime tradition, will only have the greatest respect for all the teachings of the Buddha, and never look upon them with wrong view or disparage them in any way. It was Jonang Jetsün Tāranātha who said that there is not much point killing one parent in order to save the other, and by the same token, it will never be acceptable to further one tradition by destroying another.

During the Siliguri empowerments and transmissions of Jamyang Khyentse Wangpo, HE Shechen Rabjam Rinpoche advised all the participants to practise three short daily  sadhana texts of the terma cycle that represent the three roots: the outer, inner and secret aspects.  These are the Outer Guru Rinpoche sadhana, White Vārāhī and the Wrathful Guru, Pema Dragpo.

In the Luminous Heart Essence of the Three Roots, (see previous post about the text here) the title refers to the three roots (rtsa ba gsum), these are:

According to the Vajrayana:

The outer guru sadhana is said to be the ‘root’ of the ‘three roots’ in this treasure cycle, according to an oral instruction given by Changling Rinpoche at the event, who says:

After attending these empowerments, I  compiled and edited these three daily sadhanas of the ‘three roots’  (see images below) together with the original Tibetan script, phonetics and English translation (personally I like to do it with the Tibetan script!).  So, if anyone with the requisite empowerment would like to do the same, please contact me here for a free copy. 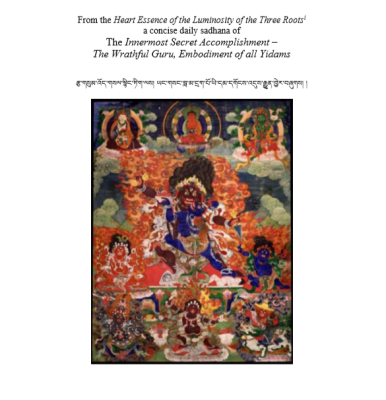 May it be of benefit in helping to preserve the lineage, texts and practise of Jamyang Khyentse Wangpo and attaining the fully awakened state!

The Life of Jamyang Khyentse Wangpo