I have been dipping into Dr. Alexander Gardner’s wonderful new book The Life of Jamgon Kongtrul The Great, recently published by Shambhala, and came across the section (pp.124-128) about about Kongtrul’s first visit to the Jonang monastery in Dzamthang in 1848, where he got the full Jonang transmission of Kālacakra and the six Vajra yogas from Jonang master, and his teacher, Ngawang Chophel (sngags dbang chos ‘phel). Also, the place where he wrote his well-known philosophical and meditation instruction text on Shentong Madhyamaka: The Light Rays of the Stainless Vajra Moon (this has been translated into English by Karl Brunnholzl in When the Clouds Part: The Uttaratantra and Its Meditative Tradition as a Bridge between Sutra and Tantra (Shambhala, 2015).  For more detailed descriptions on Kongtrul and his Jonang teachers and connections see this post here.

I was stunned and inspired to read about events that happened during Kongtrul’s trip to get to the monastery. A tale of murder plots, black magic and more.  The story which I reproduce here in full from the book, takes one back to a time of extensive Dharma activity, where tantric masters travelled and practised extensively giving transmissions and empowerments and meeting people. Yet, also of the local politics and threats to their lives and the divnations, dreams and methods and rituals they used to repel and pacify them.  Kongtrul faced a threat to his life from a rogue Pelpung monastery lama called Kuntrul, who practised black magic. Gardner states it is not certain why Kuntrul had a grudge again Kongtrul and Pelpung but he appears to have been banished from the monastery by Situ.

During the trip, Kongtrul and his companions faced several threats to their life from Kuntrul and a Sertar chieftain which resulted in two men from Sertar being killed due to the conflict. As Gardener surmises, it does not just appear that Kongtrul protected his companions and himself with various rituals and so on, but that they positively ‘vanquished their enemies’ likethe victor in a ‘deadly black magic contest’. The story ends with Kongtrul returning to Pelpung monastery and requesting Tai Situ to give him the Kalacakra empowerment and transmisison of the six vajra yoyas ‘to place a Kagyu frame around the Jonang teachings he had received.’

It is worth reading the story in full:

Extracts from The Life of Jamgon Kongtrul the Great by Alexander Gardner (Shambhala Publications, 2019) – click on the photo below to expand and enlarge the text: 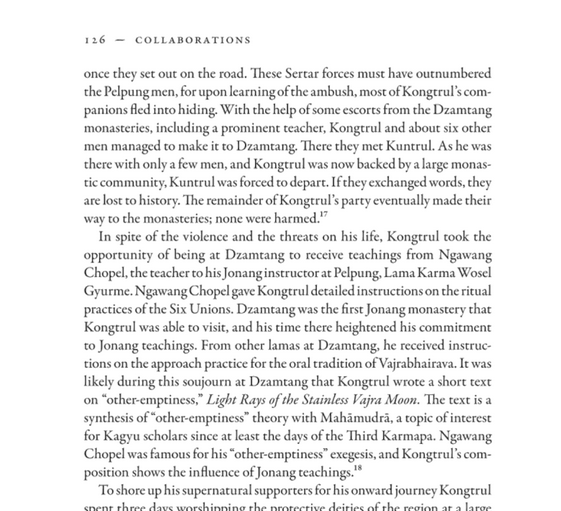