This is to announce the online launch of  the first English-language translation and publication of A Hundred Blazing Lights: A Supplementary Commentary on Meaningful to See, the Profound Path of the Vajra-yogas [i] , one of the most important instruction texts [khrid yig], in the Dro Kālacakra lineages (such as Jonang and Karma Kagyu). Composed by eminent Jonang Tibetan Buddhist master, Jetsun Tāranātha, it is still used today to instruct practitioners who wish to undertake the Kālacakra path to full awakening.

The other two important texts used within this tradition are Meaningful to See (Mthong ba don ldan)[ii] by Tāranātha; and Chariot that Transports to the Four Kāyas[iii] by Bamda Gelek Gyamtso. Both texts are widely used today, within and outside Tibet, by those wishing to practice the Kālacakra six vajra-yogas. I recently translated and published both these texts (see footnotes). 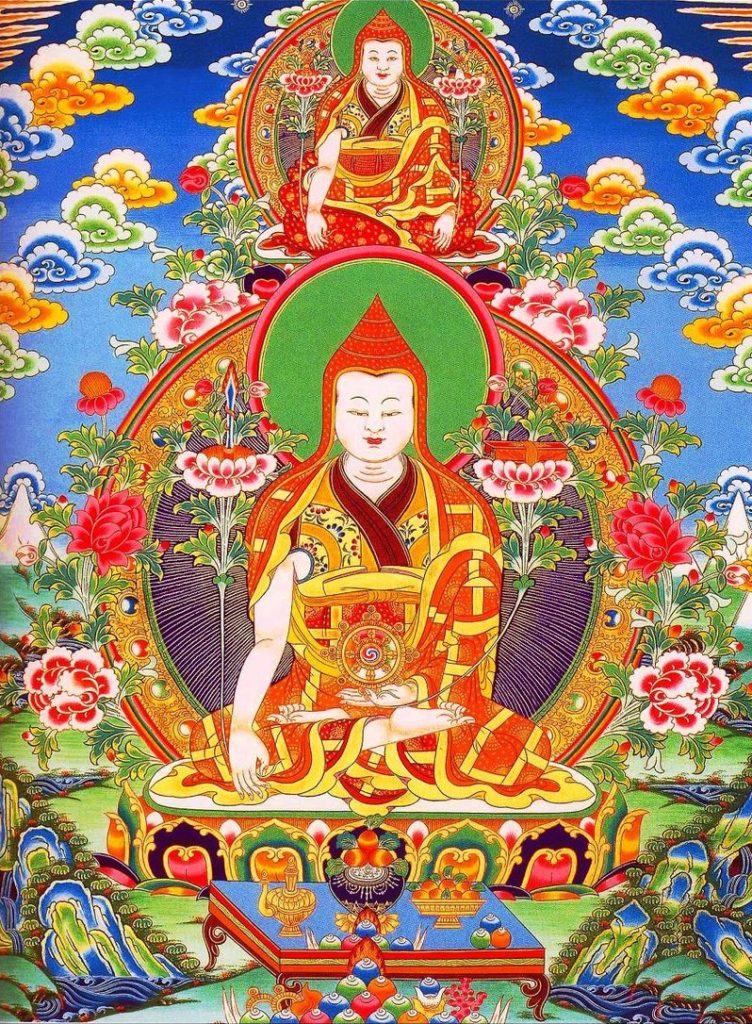 A Hundred Blazing Lights is an extensive and detailed commentary on Tāranātha’s much shorter root text, Meaningful to See.  Tāranātha, not only gives detailed instructions and visualisations and philosophical points but also valuable accounts of textual and historical background and sources.  The colophon says that Tāranātha composed it at mountain retreat in Tibet ‘while staying in Shambhala’, for the benefit of beings and inspired by one of his of main lamas, the Sakya master, Kunga Lungrig Gyatso [iv]  who was a devout student of the renowned Kālacakra master, Kunga Drolchok (kun dga’ grol mchog, 1507-1566)). Tāranātha also mentions being encouraged to write something by a Kagyu master, Taglungpa Chenpo, Ngawang Trashi Pal Drub[v].

Unlike other Tibetan Buddhist lineages and yidam practices, in the Dro Kālacakra practice tradition, there are seven preliminaries (five common and two uncommon) that must be completed before commencing practice of the completion stage six vajra-yogas, the completion stage. The generation stage, of Innate Kālacakra (dus ‘khor lhan skyes), is taught to be an uncommon preliminary and not a ‘main practice’. The other uncommon preliminary is called the ‘three isolations’ (dben pa gsum), which involves ‘isolating’ one’s body, speech and mind in dark retreat and so on.

A Hundred Blazing Lights is not an instruction manual alone. Although the preliminary practices are similar to other traditions, such as Refuge, Bodhicitta, Vajrasattva, Mandala Offering and Guru Yoga, the philosophy, visualisations and mantras differ in several important respects. In addition, the text also includes interesting historical and philosophical information about the source of the practice, why the six vajra-yogas are the ultimate intention of all Mahasiddhas, Vajrayana practices and texts, why the Kālacakra tantra is the pinnacle of all the sutras and tantras, the seventeen Kālacakra lineages that came from India to Tibet as compiled by the Jonang master, Kungpang Chenpo, the background of the Kālacakra six vajra-yogas and their transmission to the main Indian master of the Jonang and Dro lineage, Vibhuticandra[vi].  Therefore, this texts is as important (if not more) to the contemporary Jonang and Dro Kālacakra six vajra-yogas traditions, as a text like the Torch of Certainty, by Jamgon Kongtrul the First, is to the Karma Kagyu.

Recently, within the Jonang tradition, the head of the Jonang lineage in Tibet, HH Jigme Dorje Rinpoche, issued a letter stating that pith instructions on the six vajra-yogas completion stage are not to be publicly disseminated or ‘commercialised’. For that reason, it is unlikely that there will ever be a publicly available translation of the six vajra-yogas instructions themselves. The recently deceased, scholar-translator, Edward Henning, had translated some of the pith instructions on the vajra-yogas into English from the text ‘Meaningful to See‘ (he sent me a copy of his draft for private use before he passed away). For more information on the six yogas, see Edward Henning’s notes about them on his website here, based on another text by Tāranātha. Henning states:

The Six Yogas (sbyor drug), or Vajra-yogas (rdo rje’i rnal ‘byor), are the perfection process (rdzogs rim) meditations of Kālacakra. The Vajrayana path is very structured, and before the Six Yogas can be practised, it is necessary first to perform a set of preliminary practices (sngon ‘gro), and then go on to the main yidam meditations, or generation process (bskyed rim) meditations of Kālacakra. In the Kagyu and Jonang traditions the yidam practice requires in addition to the regular generation process meditation a recitation of 10 million Kālacakra mantras.

These are all necessary preliminaries for the performance of the Six Yogas, although some favour practising both generation and perfection process meditations together after a significant grounding has first been developed in the generation process.

So, these are not practices for beginners, and there is no intention in these notes to describe how to perform any of the Six Yogas – in fact that will be deliberately avoided. However, the theory is worth describing, and the Six Yogas are perhaps the pinnacle of Vajrayāna practice, and consequently very important to Vajrayāna Buddhism as a whole.

The structure and contents A Hundred Blazing Lights, up to and including the five common preliminaries, are as follows (click on the links for a more detailed outline):

To complete this project, due to many obstacles and challenges, I have decided to gradually publish each chapter with announcements on the site as and when they are uploaded. This first post here is the ‘Introduction’. Chapter One will be released in the next few days. Once they are all uploaded and complete, the chapters will then be collated and published as one book.

As these have been translated mainly for the purposes of instruction and practice, I have included footnotes, but not extensive, academic ones, nor critical editions of the texts.  A separate text, The Celestial Stairway, of the sadhana recitations of these preliminary practices written by Tāranātha, has also been translated and published in English[vii]. My translation of the uncommon preliminary, generation stage Innate Kālacakra (dus ‘khor lhan skyes) sections of these three texts has been published (a project that was awarded the Ashoka Grant by the Khyentse Foundation)  see here.

Oral transmission and instruction on these texts was given in person, over several months, by Jonang lama, Chokyi Nangwa Rinpoche in 2017.  It was his request that the text be translated into English for students who wish to practise the profound path of the glorious Kālacakra six vajra-yogas.  There are no prior unpublished, or published, English translations of A Hundred Blazing Lights.

The first translation of a Tibetan text is always the hardest to do, as there is no guide in English to support it. Therefore, for any unintended errors, I apologise. I hope that this translation will be of benefit to those who wish to practice these preliminaries and will serve as a guide and basis for future translations in different languages.

N.B Please do not read or practice any of the instructions on the preliminaries, until and unless you have the requisite Kālacakra empowerment and guidance from a qualified lineage master.

[iv]According to a biography on Treasury of Lives:

Kunga Lungrig Gyatso was a disciple of Kunga Drolchok (kun dga’ grol mchog, 1507-1566). He was born in upper Nyang (nyang stod) in the hereditary line of the Tsangkhangpa rulers (sde pa gtsang khang pa). Lungrik Gyatso extensively studied the traditions of sutra and tantra at the Sakya monastery of Serdokchen (gser mdog can), the monastic seat of the great Paṇchen Śākya Chokden (paN chen shAkya mchog ldan, 1428-1507). In particular, he received from Kunga Drolchok the complete transmission of the Kālacakra initiation, the Kālacakra Tantra, and the esoteric instructions of the six-branch yoga. Many years later, it was Lungrik Gyatso who recognized Tāranātha (tA ra nA tha, 1575-1634) as the reincarnation of Kunga Drolchok.  Lungrik Gyatso served as the abbot of Gyantse (rgyal rtse) and other monasteries. Following the enthronement of Tāranātha at Jonang Monastery, Lungrik Gyatso passed to him all the teaching transmissions that he had received from Kunga Drolchok. He apparently passed away soon afterward.

Meaningful to See: Instructions on the Profound Path of the Six Vajra-Yogas by Jetsun Tāranātha

Chariot that Transports to the Four Kayas: Path of Excellent Meditation on the Six Vajra-Yogas by Bamda Gelek Gyamsto