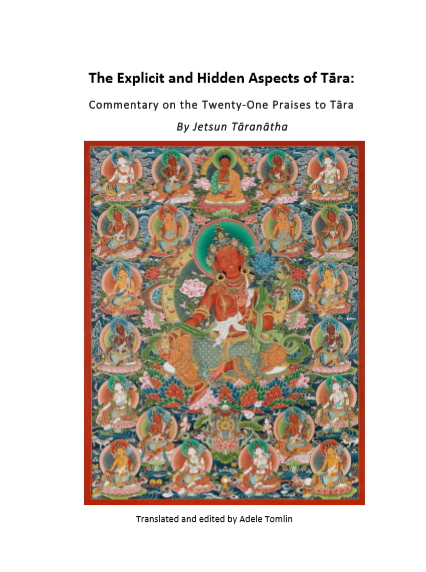 On the the Kālacakra New Year, the full moon of the third lunar month (Nagpa Dawa),  I am happy to announce the first English translation (and publication) of the Commentary on the Praises to the Twenty-One Tāras (Phyag ‘tshal nyer gcig gi bstod pa’i rnam par bshad pa), The Explicit and Hidden Aspects of Tāra, composed by Jonang, and Shangpa Kagyu, master Tāranātha (1575-1634)[i].  The text gives a verse- by-verse explanation of both the explicit (or literal) meaning of the words of the commonly-recited Praises to the Twenty-One Tāras, as well as their hidden (or secret) meaning.

As the commentary gives instruction on the ‘hidden’ or ‘deeper’ aspects of Tāra, with Tāranātha also stating how each Tāra relates to the six yogas of Kālacakra, this text should only be read by those with the requisite Tāra and Kālacakra empowerments. Thus, it should not be re-published or copied for public use without permission. Please contact me here if you would like a free copy to download for personal use.  Below is  the introduction to the commentary (excerpted from the publication):

The Praises to the Twenty-One Tāras

The tantra known as the Praises to the Twenty-One Tāras was spoken by the Buddha Samantabhadra out of which arose the system of practice with twenty-one Tāra emanations – one for each verse of praise.  Each form of Tāra has a specific colour and accomplishes a specific activity.  There are said to be at least four ‘twenty-one Tāra’ traditions, those of Sūrya-Gupta (7th/8th cent.), Atīśa Dipaṃkara (982-1054), Longchen Rabjampa (1308-1363), and Terchen Chokgyur Lingpa (1829-1870). The latter three traditions are very similar in that the individual Tārās are described as varying only slightly in body colour and the emblems shown on the lotus flowers they hold.  The two most well-known are the twenty-one Tāras according to the Atīśa tradition, and the earlier, more complex, twenty-one Tāras according to the great Mahasiddha Sūrya-Gupta [i].

In the Atīśa system all the Tāras have the same basic appearance and only differ in the colour of the body.  Green is considered the primary colour of Tāra based on other teaching lineages describing Tāra in solitary form or with the accompanying deities Marichi and Ekajati. However, green Tāra is not included in the enumeration of the twenty-one Tāras of Atīśa.  There are four red Tāras, six white, three yellow, four orange, two maroon (red-black) and two black Tāras for a total of twenty-one.   Each of the individual Tāras holds a vase in the outstretched right hand. The vase is the same colour as the body colour of that Tāra. Some of the Tāras are described as being slightly fierce, meaning they may have an open mouth with slightly enlarged canine teeth and furrowed brow above the eyes.  For more on the specific colours and attributes of each Tāra see here. 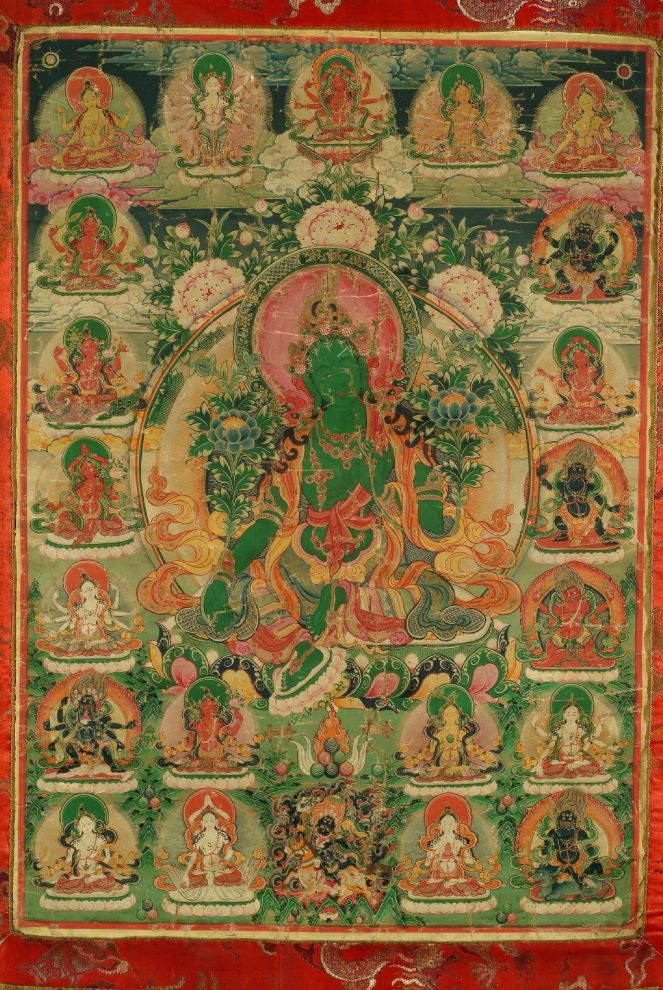 Tāranātha does not specify exactly which tradition or specific visualisations he follows in this commentary. However, in his other commentary on the twenty-one Tāras (see below) he specifies that he is teaching the Atīśa tradition [iii].

Tāranātha was an expert scholar on Tāra and wrote several sadhanas and instruction texts about Tāra[iv], and a historical text about the origin and history of the Tāra tantras, which has been translated and published in English by David Templeman[v].  In a recent article by Templeman, Tāranātha describes what happened when he met his Indian master teacher, Buddhaguptanātha[vi]:

The ascetic told the young student of his own trans-oceanic travels to Potalaka, the abode of Avalokiteśvara, which was also believed to be the abode of the form of Tārā known as Bhṛkuṭī as well as being the actual residence of Tārā. The young Tāranātha requested Buddhaguptanātha for the yoga empowerments for Tārā, the root instructions for her practice as well as for the requisite blessings to permit him to commence them. He then had certain visionary dreams of Tārā and other deities who predicted that if he were to supplicate Avalokiteśvara until his twentieth year he would become a master of the caryā practices of Avadhūtipa and would as a result spread the Buddhist doctrine in various nearby lands, especially in Garzha (gar zha) in the region of Zangskar (Tzangs dkar). Almost drily, Tāranātha observes that despite this dream prophecy of Tārā he never really put the necessary requirements into practice and therefore did not fulfil the prophecy.[vii]

Another famous text by Tāranātha, known as the Ocean of Yidam Deities[viii], contains the descriptions and short sādhanas for altogether four hundred and seventeen deities.  Among them are forty-two aspects of Tārā[ix].

There are three extant Tibetan editions of this Tibetan commentary available online at TBRC.  The main one I have used is in the Collected Works of Tāranātha, published in Beijing[x].  It is also contained in the other major editions of Tāranātha’s Collected Works, under a different Tibetan title[xi].  As far as I can see, there are no major differences between the texts, although I have not done a critical edition.

There is another Tāra commentary written by Tāranātha, on the definitive aspects of Tāra The Ṭīkā Commentary on the Definitive Characteristics of Noble Tāra, which is found in the Beijing and Dzamthang editions of his Collected Works[xii].  In the colophon of this work, it states that it was composed by Tāranatha when he was thirty years old.  This second commentary is very similar to the main commentary of this translation, however, as there are slight differences or additional explanations, I have included them as annotations where relevant.  In this second text, for example, Tāranātha refers to the ‘hidden’ meaning as ‘definitive’.

The main commentary of this book consists of a verse-by-verse explanation of the twenty-one Tāras, in terms of the explicit and hidden meaning.  The text does not state when, or where, Tāranātha wrote the text and it is not clearly mentioned in his biographical material, according to scholar, David Templeman.

In this commentary, within the explanations of the hidden meaning, Tāranātha refers to how they connect to the six vajra-yogas of Kālacakra[xiii]. However, as he does not give the actual pith instructions on them, it would not be inappropriate for people to read it. Nonetheless, it is highly recommended to have the Tāra and/or Kālacakra empowerment, transmission and instruction before reading this text.

In the Kālacakra tradition, the completion stage consists of six vajra yogas.  These practises involve the manipulation and control of the channels, winds and essential drops.  By doing this, a practitioner can attain the fully enlightened vajra-body state of Kālacakra, or here Tāra,  in one lifetime[xiv].  Deities are sambhogakhāya Buddhas and so even though on the relative level they appear different with differing qualities and aspects, on the ultimate level they are inseparable from and are the embodiments of the ultimate Buddha, the Tathāgatagarbha. Therefore, in that respect, all deity practices are leading to the same result.

When Tāranātha specifically refers to one of the vajra-yogas, I have included annotated references of some of the descriptions given by Tāranātha in his major root text on the Kālacakra preliminaries and six vajra-yogas, Meaningful to See[xv] and some of Jamgon Kongtrul the First (a devoted follower of Jonang Kālacakra and Tāranātha), in his Treasury of Instructions: Book Eight, Part Four:  Esoteric Instructions.[xvi]

For Tāranātha, the Kālacakra six vajra-yogas are the pinnacle of all the tantras; all other advanced practices, whatever name they go by, include them.  As he states at the beginning of his instructions on the six vajra-yogas in Meaningful to See[xvii]:

Here in this text too, according to Tāranātha, the practice of the hidden (or ultimate) aspects of the twenty-one Tāras, is a practice on the six vajra-yogas.

I received the direct oral transmission and instruction on the text from Jonang lama, Chokyi Nangwa Rinpoche in 2017.  However, due to various obstacles, and a lack of harmonious and supportive conditions, I was unable to complete it until 2020.  Thanks also to sponsors and supporters, in particular, Gonpo Jack, Louise, and the Khyentse Foundation. I apologise for any errors and dedicate the merit that we may one day see all sentient beings as precious and as worthy of our love and compassion, as our only child and by doing so attain the fully awakened state of Noble Tāra.

[i] Thomas Roth says (2009): “According to Tāranātha, Sūrya-Gupta was born in present day Kashmir. A Mahāsiddha who practiced and accomplished Tārā for seven consecutive lifetimes, he was a contemporary of such masters as Śantideva, Candrakīrti, and Candragomin, another important master in the various transmission lineages of the Tārā tantras and practices.”

[ii] For an extensive description of the twenty-one Taras according to the Sūrya-Gupta lineage, see the post: ‘The 21 Tārās of Sūrya-Gupta’ by Thomas Roth (2009) on the Jonang Foundation website at https://jonangfoundation.org/blog/21-t%C4%81r%C4%81s-s%C5%ABrya-gupta

[iii] Martin Willson in his book, In Praise of Tārā (1992), traces many different lineages of Tārā Tantras, Tārā scriptures used as Tantric sadhanas.  Willson’s work also contains charts which show origins of her tantras in various lineages.  Tārā as a tantric practice quickly spread from around the 7th century CE onwards, and remains an important part of Vajrayana Buddhism practice.

[iv] For my compiled catalogue of extant texts on Tāra by Tāranātha in the main editions of his Collected Works, see Appendix A.

[vi] Buddhaguptanātha, an Indian tantric master, (16th century) was one of the main teachers of Tāranātha.  His life was  recorded in extensive detail by Tāranātha who wrote his biography around the year 1601. Tāranātha’s work is almost entirely devoted to his journeys across South and Southeast Asia and the many miraculous events that he experienced. Tāranātha presents the narrative as a faithful account of the events as told him by Buddhagupta himself. For more on his life see TEMPLEMAN 2002 and 2009 and the Treasury of Lives biography.

[ix] For an English translation of these different descriptions, see the post by Thomas Roth (2009) at https://jonangfoundation.org/blog/tāranātha’s-descriptions-tārā

Here the definitive characteristics of the renowned essence of the source of the Tāra tantras, is that of the tradition of the Twenty-One Tāras of great master, Dipamkara Shri Jnana (Atisha).  Atisha himself, made a concise summary of his extensive explanations of the tantra. This is that together expanded with some other explanations taught by lamas. In relation to that, there are three teachings: the explanation of the meaning of the Praises to the Twenty-One Tāras, the application [training] of the definitive characteristics and the number of characteristics.  From among those three, first, if one speaks of a word by word commentary, since there are many, I will roll it up into the essence.

I have only translated the first of these three: the explanation of the word for word meaning for the purposes of this text.

[xiii] Six vajra-yogas (ṣaḍañga-yoga, sbyor drug).  These are the completion stage practices according to the Kālacakra system.  The six yogas are:

[xiv] For more on this see DHARGYEY (1998) and TOMLIN (2019a and b).  The recently passed scholar-translator, Edward Henning, also gave some detailed descriptions of the six vajra-yogas on his website, www.kalacakra.org and in his article ‘The Six Vajra Yogas’ (see HENNING 2009).

[xv] Meaningful to See (mThong ba don ldan) is an important text by Tāranātha, and is still used by the Jonang and other traditions when teaching the Kālacakra six vajra-yogas.  Unpublished translations of this short, root text have been completed by Cyrus Stearns and Edward Henning.  I have now also translated this text and the much larger supplementary commentary to it, A Hundred Blazing Lights. Both texts will be published together in the near future.  The edition I have used here is the Peking edition (2008), see Zab lam rdo rje’i rnal ‘byor gyi khrid yig mthong ba don ldan/ in gsung ‘bum/_tA ra nA tha/ （dpe bsdur ma/), Volume 7, pp. 33 – 138, TBRC W1PD45495.