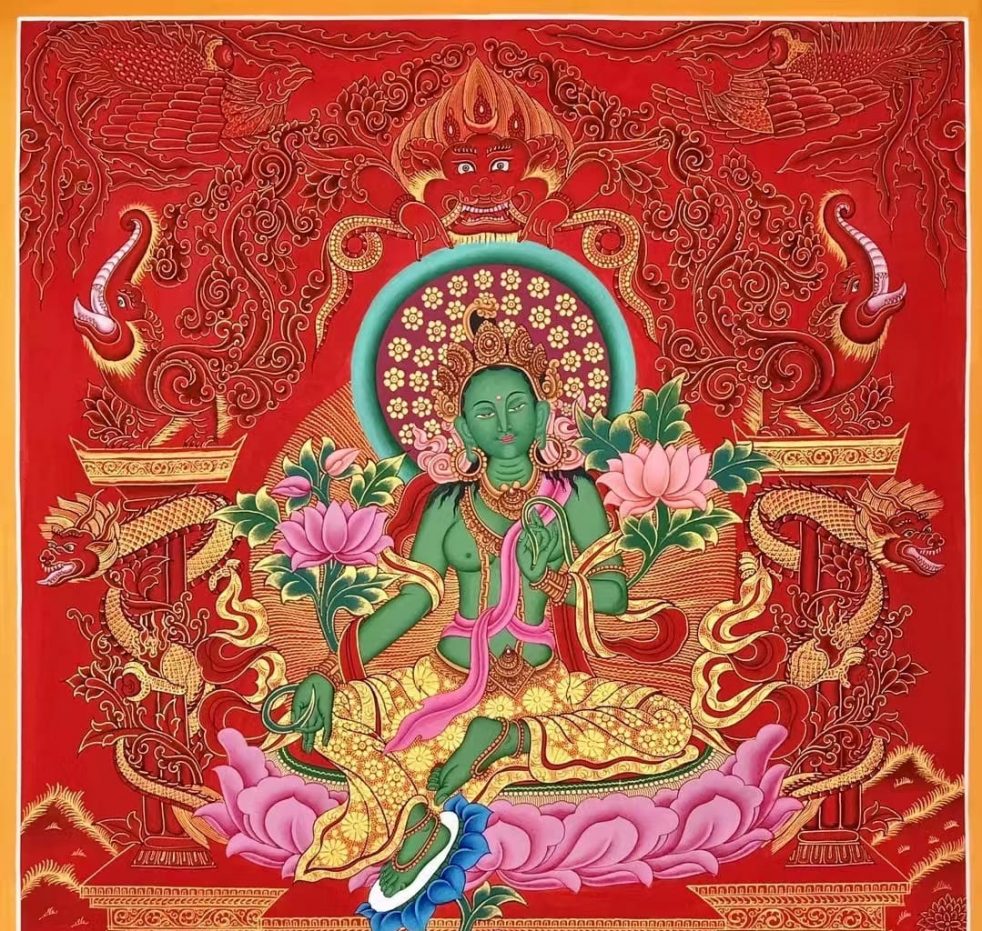 “Love and compassion are necessities, not luxuries. Without them humanity cannot survive.” –Dalai Lama.

Today, as a continuation of the research and translations I have been doing on Avalokiteśvara (see here), I offer a short post on the ‘Stairway to Potala: Guru Yoga of Avalokiteśvara‘, recently transmitted by HH 14th Dalai Lama during a teaching on the Heart Sutra in January 2021, Dharamsala, India, see here. The 14th Dalai Lama has taught many times on the view of emptiness in the Heart Sutra and also given teachings on the Empty-of-Other view (Zhentong) advocated by many Jonang, Kagyu and Nyingma masters (see here).

The oral transmission of the Guru Yoga text can be watched here, from 19.30 minutes onwards:

A few days ago, a kind and generous sponsor/supporter of my work, requested this text with Tibetan and phonetics, as there was only an English translation publicly available.  As an offering to her, and to others who may want to read the text in Tibetan, I have thus produced a version with Tibetan, phonetics and the English, please see below, and/or in this pdf : Chenrezig Guru Yoga text by 14th Dalai Lama.

Before that, I give a a brief introduction to the text and where it was composed, Norbulingka.

May it be of benefit in helping us all climb the stairway to the heavenly Potala, abode of the deity of love and compassion, Avalokiteshvara and emanate rays of infinite light and love in all directions.
Written and compiled by Adele Tomlin, 23rd June 2021.

The text itself is called ‘Stairway to Potala’  (གྲུ་འཛིན་ཞིང་གི་ཐེམ་སྐས་) referring to the Potala Palace in Lhasa, Tibet (see image above), which was the winter palace of the Dalai Lamas from 1649 to 1959. The palace is named after Mount Potalaka, the mythical abode of the bodhisattva Avalokiteśvara. The 5th Dalai Lama started its construction in 1645 after one of his spiritual advisers, Konchog Chophel (died 1646), pointed out that the site was ideal as a seat of government, situated as it is between Drepung and Sera monasteries and the old city of Lhasa.  It is said that it overlays the remains of an earlier fortress called the White or Red Palace on the site,  built by Songtsen Gampo in 637.

It is a short and simple daily sadhana on the four-armed Avalokiteśvara, white in colour with crystal mala and lotus flower in one pair of hands, and a jewel held between the other pair of hands  (see image above). The recitation is of the mantra of compassion, Om Mani Padme Hum:

A well-known Tibetan female teacher and state oracle for Tibet, Khandro-la, stated that she had a clear vision of the 14th Dalai Lama, while he was seated in a car, as the 1000-armed Avalokiteśvara (see a video of her here in 2012, with the 14th Dalai Lama, 17th Karmapa and Sakya Trizin.

Fresco from Ajanta Caves of Avalokiteshvara as Padmapani 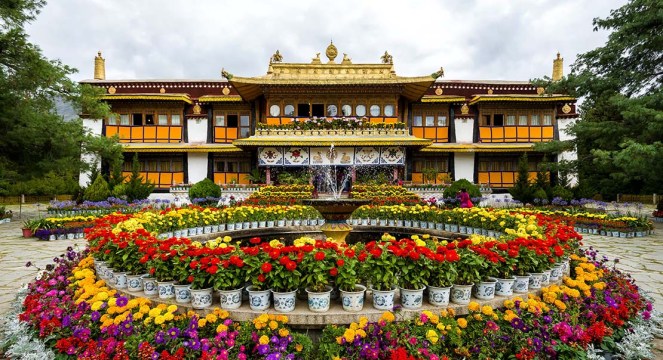 The text was composed by the 14th Dalai Lama in Norbulinkga, Tibet, which is the summer residence of the Dalai Lamas.  Norbulingka (ནོར་བུ་གླིང་ཀ་; traditional Chinese: 羅布林卡; literally “Jeweled Park”) is a palace and surrounding park in Lhasa, Tibet, China, built from 1755. It served as the traditional summer residence of the successive Dalai Lamas from the 1780s up until the 14th Dalai Lama’s exile in 1959. Part of the “Historic Ensemble of the Potala Palace”, Norbulingka is recognized as a UNESCO World Heritage Site, and was added as an extension of this Historic Ensemble in 2001.

In the past, the area was prevalent with weeds, scrubs, and wild animals, and was frequently visited by the 7th Dalai Lama in the summer. Some records suggested the Dalai Lama used the hot springs in the area to cure his health problems. The Imperial Minister of the Qing Dynasty ordered for a Pavilion Palace to be built for the Dalai Lama as a summer retreat. Later in 1751, a three-floor palace named Kelsang Potrang inside Norbulingka itself was added by the 7th Dalai Lama which consisted of the Buddha hall, an assembly hall, a reading room, a god temple, and a bedroom. The 8th Dalai Lama made additions to Norbulingka in the form of palaces such as the Dragon King Temple, the Lake Heart Palace, and Han-style pavilion and gardens.

Norbulingka Palace is situated in the west side of Lhasa, a short distance to the southwest of Potala Palace and covers an area of around 36 hectares (89 acres). It is considered to be the largest man-made garden in Tibet.  During the invasion of Tibet in 1950s, a number of buildings were damaged, but were rebuilt beginning in 2003, when the Chinese government initiated renovation works to restore some of the damaged structures, and also the greenery, the flower gardens and the lakes.

Kelsang Palace. This palace was built by the 7th Dalai Lama in typical Tibetan style and consists of worship rooms, reading rooms, and bedrooms. The main hall features the throne of the 7th Dalai Lama amidst statues of Guanyin Bodhisattva and Longevity Buddha.

It lies to the northwest of Kelsang Palace in the midst of the lake and has an attractive pavilion built by the 8th Dalai Lama.

Golden Linka and Chensel Palace. To the northwest of Kelsang Phodrong lies also the Chensel Palace and on the west side of Norbulingka is the Golden Phodron. Both these were built in 1922 by a benefactor for the 13th Dalai Lama.

Takten Migyur Palace (达旦明久颇章). Built in 1954 by 14th Dalai Lama,  was built by the 14th Dalai Lama and is also referred to as the New Summer Palace. More magnificent and larger than the other palaces, the New Palace features exquisite murals of Sakyamuni and his eight contemplative disciples, and also those related to the development of Tibet.

The Norbulingka park is where the annual Sho Dun or ‘Yoghurt Festival’ is held.

There is a replica of Norbulingka that has been constructed in Dharamsala, India based on the proportions of 1000-armed Avalokiteśvara .

“With generous donations from many patrons who believed in the vision of Norbulingka, the land was purchased in 1984 and construction began in 1988. The ground plan was designed to follow the proportions of Avalokitesvara, the deity of compassion. The workshops and offices were to be constructed in the shape of his thousand arms. The temple would be his head, while in the middle would be a water spring, representing his heart, emanating kindness to all living beings. In the beginning, most of the artists were employed for the actual construction of the institute, which was designed in traditional Tibetan architectural style.”[i]

I can personally vouch it is one of the most beautiful places to visit there with stunning gardens, a temple, library, café, guesthouse and restaurant and houses an institute where people study traditionalTibetan crafts and arts, such as thangka painting and wood carving. [ii].

Inside the Buddhist temple of Norbulingka, Dharamsala, India.

A Very Short Sadhana of Avalokiteshvara

Written by His Holiness the 14th Dalai Lama

Those who wish to do a short practice unifying one’s Teacher(s) and Avalokiteshvara inseparably should do so by first taking refuge and generating the spirit of enlightenment (Bodhicitta).

[The Taking Refuge and Generating Bodhicitta are not actually included in their full form in the original Sadhana, but are here incorporated for the practitioners‟ sake].

I take refuge in the Buddha, Dharma and Supreme Sangha

Until I am enlightened.

Through the collection of generosity and other practices

May I achieve Buddhahood to benefit all sentient beings.

[The original Tibetan Sadhana starts again from this point].

On my crown, upon a seat of lotus and moon, Sits my root Teacher,

Who is inseparable from Supreme Noble Avalokiteshvara, Lord of the World,

With one face and four hands: the first two hands folded in prayer

And the two remaining hands holding a crystal rosary

And a stem of a full bloom white lotus.

His two feet are in the indestructible cross-legged position;

His body, a maiden moon, is replete with clear and complete marks and signs of [a Buddha],

and draped in silk raiment and precious jewel ornaments.

Of which Hum at the heart radiating light Invokes the supreme refuges that dissolve into himself.

He becomes the embodiment of all the objects of refuge combined.

I repeatedly bow to my Teacher and deity,

I offer to you an ocean of clouds of All Excellent (Samantabhadra‘s) Offerings.

I confess my wrongdoings and restrain myself.

I rejoice in the good deeds of your three secrets (of body, speech and mind).

I entreat you to bring down the vast and profound rains of teaching.

I pray you be un-wavered and that you remain steadfast for hundreds of aeons.

I dedicate all the collections of my virtue for the great enlightenment!

From the HRIH syllable, your heart symbol, and the mantra circle at your heart

Light radiates cleansing the impure worlds and their inhabitants

To the sublime level of the Lotus Holder (Padmapani).

[In conjunction with the meditative prayer, recite as many times as you can this Six-syllabled [Mantra]:

As I have no other to rely on but you,

From here until I reach enlightenment

Kindly guide me with your great compassionate heart.

Thus, by the force of this heartfelt prayer,

My Teacher melts into light and dissolves into me,

With the hundred-fold blessings of the three secret vajras (his body, speech and mind).

Through this virtue may I quickly

And may I lead all sentient beings,

Leaving not even one of them, to the same level of Avalokiteshvara!

May the sublime jewel of the spirit of enlightenment

Grow where it has not yet taken root.

And where it has grown, may it not decline

But increase ever more and more.

Colophon: Since the official colophon is not available, what has been found and can be conveyed is: ―This Sadhana of Avalokiteshvara was written by the Great Fourteenth Dalai Lama in the Palace of Norbulingka. (in Tibet).

The English translation from Tibetan was made in 2014, by Tenzin Tsepag-la, translator of His Holiness the Dalai Lama.

[ii] “Norbulingka’s art studios include Tibetan statue making, thangka painting, screen-printing, applique and tailoring, woodcarving, wood painting, papermaking, and wood and metal craft.The Academy of Tibetan Culture, established in 1997, offers a three-year course of higher education in traditional Tibetan studies, as well as English, Chinese, and world history. The Research Department of Norbulingka houses the team composing the official biography of the Dalai Lama, of which nine volumes in Tibetan have already been published. The research section is also compiling a comprehensive encyclopedia of Tibetan culture.

The Institute also has the two-storeyed ‘Seat of Happiness Temple’ (Deden Tsuglakhang) built in 1985 and set amidst the Japanese inspired Norbulingka gardens. It is known for its 1,173 murals of Buddha, frescoes of all the Dalai Lamas and drawings chronicling the life of the 14th Dalai Lama. In the main hall stands the 4 mt high gilded copper Buddha Sakyamuni statue, made by institute’s master statue-maker, the late Chenmo Pemba Dorje, and one of largest such statues outside Tibet. Around the temple are workshops of artisans and apprentices that produce various art objects, which are sold at the Norbulingka Shop, for the benefit of Tibetan refugees.