Tibetan Buddhism is a tradition that, in particular, at the highest levels of the tantric Vajrayana, reveres, worships and respects the female. In fact, as I wrote about in Tantric Buddhism, Sex and Women: the importance of love, respect and consent, a root vow of Vajrayana (the highest level of tantric Buddhism) is not to denigrate any woman, and respect them all. Why is that? Because the female (and their bodies) are seen to be the source and essence of wisdom; the vital component of attaining the fully awakened state of Buddhahood, the union of wisdom (emptiness) and compassion (bliss).   However, for centuries these well-meaning and poetic words and images of female veneration have not been matched in reality with the way female Dharma practitioners have been treated by their male counterparts and the pervasive sexist cultural conditioning. Of course, this is not limited to the Buddhist world, male-dominated patriarchal religions have been with us for centuries, and are still going very strong in some cultures, where democracy and gender equality are poor. Recently, within Tibetan Buddhist cultures, there have been more and more practical measures taken to empower females and nuns with the Tibetan Buddhist community.

Generally speaking, as with the status and gender equality of woman globally, most of the initiatives driving change and empowerment have come from women themselves. Within the male-privileged environs of Tibetan Buddhist monasteries, apart from well-meaning words and soundbites about women from some Tibetan Buddhist lamas, few have put their ‘money and time where their mouth is’, such as that of HH 17th Gyalwang Karmapa. In this short article, I pull together some of the many initiatives and speeches the Karmapa has given on these issues, not only to show how much he has done in such a small space of time, but also as way to show appreciation and respect.

For the full article published on this website, see here. 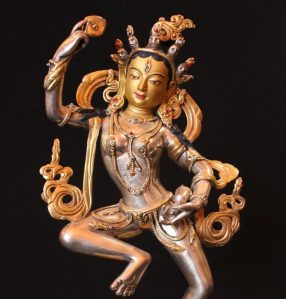